In orbital mechanics, the Hohmann transfer orbit is an elliptical orbit used to transfer spacecraft between two circular orbits of different radii in the same plane. In general, a Hohmann transfer orbit uses the lowest possible amount of energy in traveling between two objects orbiting at these radii, and so is used to send the maximum amount of mission payload with the fixed amount of energy that can be imparted by a particular rocket. Non-Hohmann transfer paths may have other advantages for a particular mission such as shorter transfer times, but will necessarily require a reduction in payload mass and/or use of a more powerful rocket.

Space missions using a Hohmann transfer must wait for the starting and destination points be at particular locations in their orbits relative to each other before performing a Hohmann transfer, which opens a so-called launch window. For a space mission between Earth and Mars, these launch windows occur every 26 months. A Hohmann transfer orbit also determines a fixed time required to travel between the starting and destination points; for an Earth-Mars journey, this travel time is 9 months. 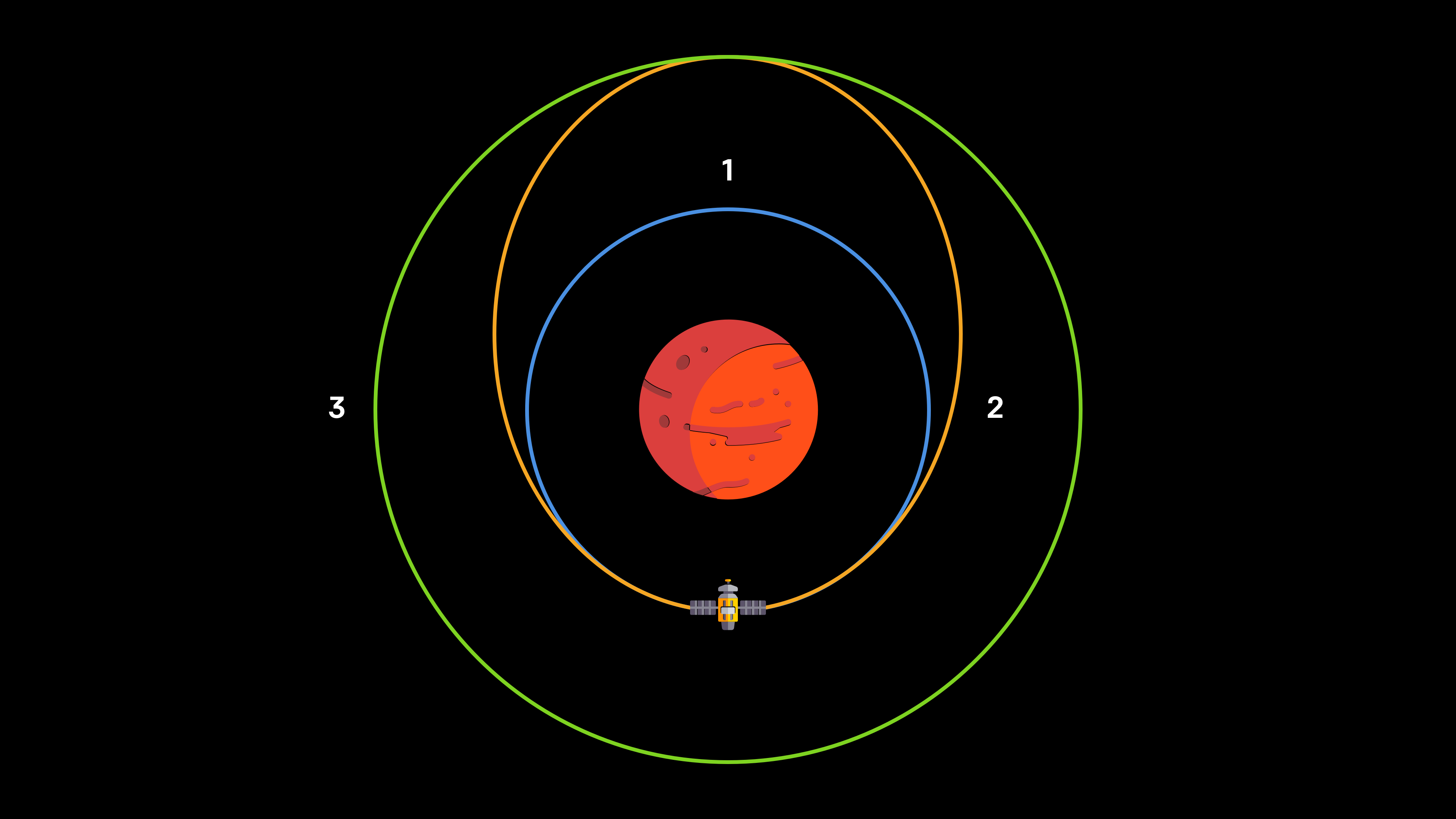 A Hohmann transfer orbit to bring a spacecraft from a lower circular orbit into a higher one.

The Hohmann transfer orbit is based on two instantaneous velocity changes. Extra fuel is required to compensate for the fact that the bursts take time; this is minimized by using high-thrust engines to minimize the duration of the bursts. For transfers in Earth orbit, the two burns are called the perigee burn and the apogee burn (or “apogee kick”); more generally, they are called periapsis and apoapsis burns. Alternately, the second burn to circularize the orbit may be referred to as a circularization burn.

The vis-viva equation, also referred to as orbital-energy-invariance law, is one of the equations that model the motion of orbiting bodies. It is the direct result of the principle of conservation of mechanical energy which applies when the only force acting on an object is its weight.

Vis viva (Latin for “living force”) is a historical term used for the first (known) description of what we now call kinetic energy in an early formulation of the principle of conservation of energy. The vis-viva equation can be used to compute the delta-v required for the Hohmann transfer, under the assumption of instantaneous impulses.

For a small body orbiting another much larger body, such as a satellite orbiting Earth, the total energy of the smaller body, \(E_{Total}\), is the sum of its kinetic energy, \(E_{KE}\), and potential energy, \(E_{PE}\).

Specific total energy is constant throughout the orbit. Specific energy is energy per unit mass.

Therefore, the desired velocity for Hohmann transfer (expected final velocity after posigrade burn at the periapsis) is:

The \(\mathrm{\Delta v}\) required for the first Hohmann transfer burn at the periapsis is:

Now, let’s fire up Kerbal Space Program and put the vis-viva equation to the test. I used one of Kerbal Space Program’s stock rockets: Kerbal X to simulate the Hohmann transfer. According to Kerbal Space Program, “The Kerbal X is one of the most successful rockets that can be ordered from a catalog. Despite the original design having been meant for a plastic model, it’s proved itself quite dependable as a full-sized craft. The X is capable of achieving orbit around Kerbin and even features a very optimistic set of landing legs on its upper stage.” 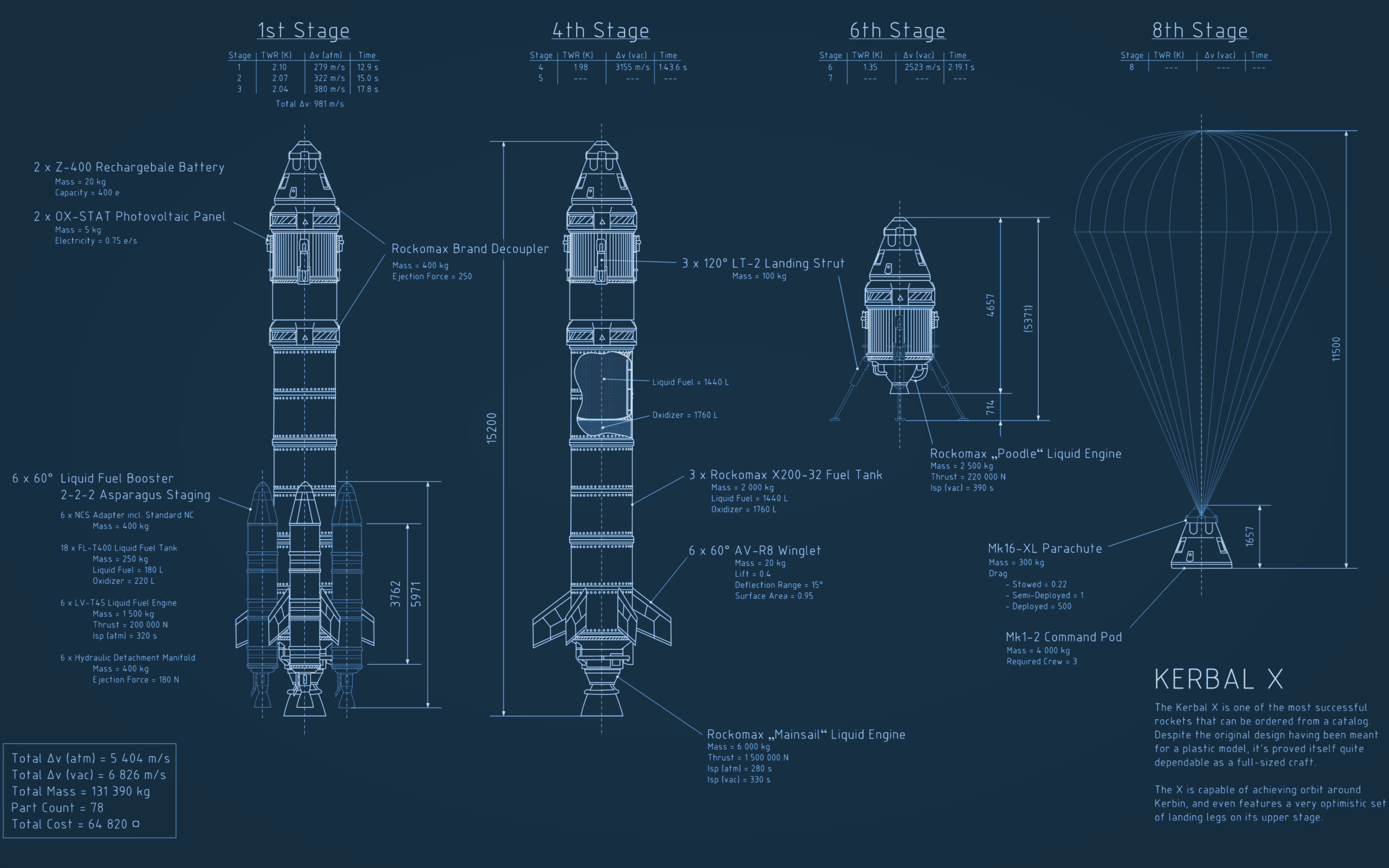 Kerbal Space Program’s wiki says: “The first stage’s central engine and relative fuel tank has 2973 m/s of Δv, not mentioning the radial ring of boosters which has 1063 m/s. This sums up to about 4036 m/s, enough to make orbit (3500 m/s) with some to spare, making the Kerbal X launch vehicle a suitable option for orbiting small-to-medium payloads. The maximum payload to Kerbin low orbit of the unmodified Kerbal X launch vehicle is slightly less than 24 tons.

The second stage has 2392 m/s Δv, and the total Δv is 6428 m/s. This total impulse is sufficient for landing on the Mun with the piloting skill of the average player, but not for returning to Kerbin afterwards. This is probably intentional: the purpose of the Kerbal X is to present a new player with a flyable and somewhat capable rocket design, that nevertheless needs some improvement in order to be fully successful. However, skilled players have demonstrated that the design as-is will conduct a round-trip Mun-landing mission. The Kerbal X is also capable of going into interplanetary orbit, able to land on Eve or Duna (or their moons, in which case landing and returning is also possible with careful planning) or fly by any other body.” 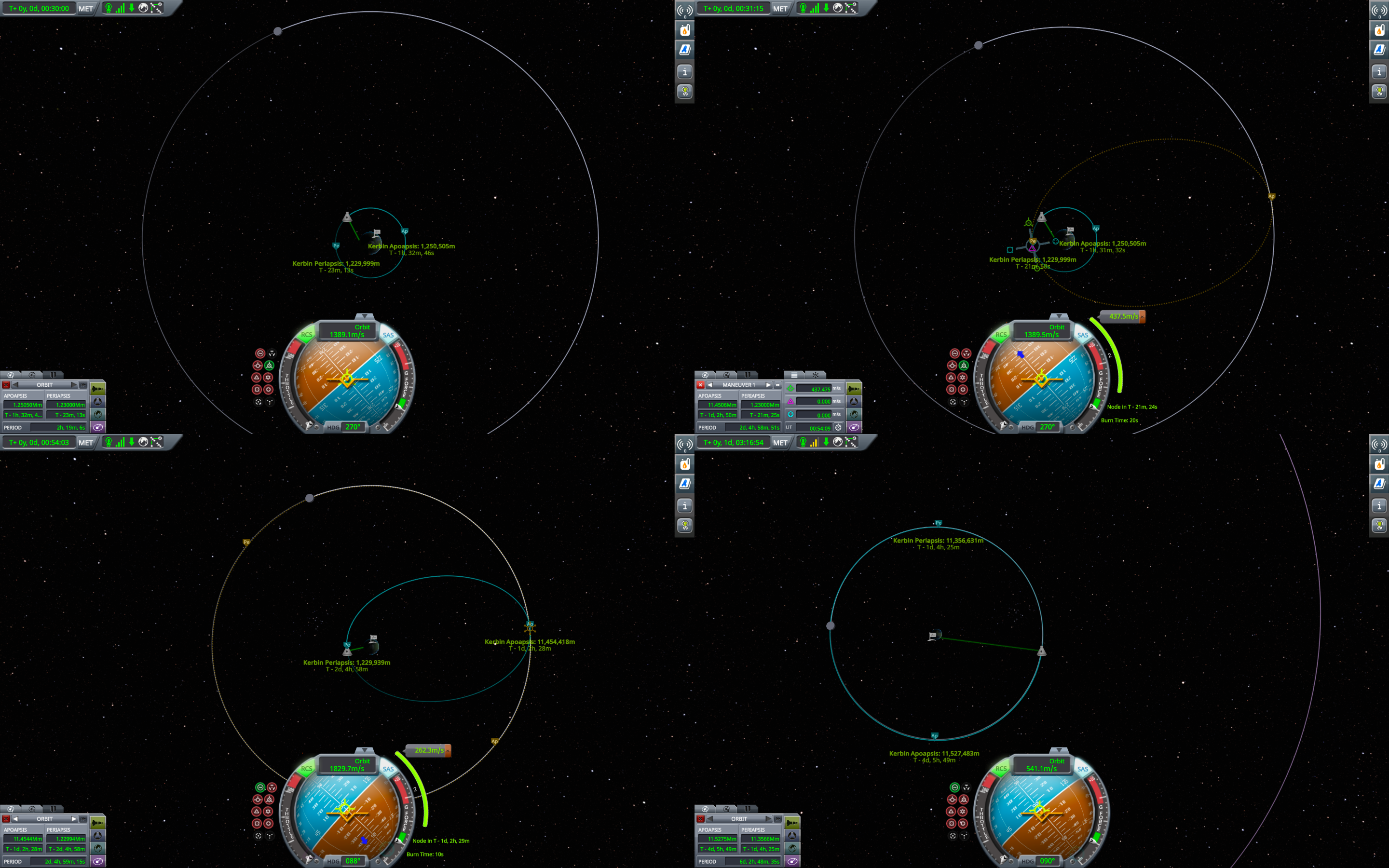 we get a \(\mathrm{\Delta v} = 441 \ \mathrm{m} /\mathrm{s}\) for the first Hohmann transfer burn at the periapsis, which is pretty close to the value Kerbal Space Program computed for us: \(\mathrm{\Delta v} = 437.5 \ \mathrm{m} /\mathrm{s}\). Once the transfer is complete, we need to perform a circularisation burn at the apoapsis of the elliptical transfer orbit. Our spacecraft is about \(11.45 \times 10^{6} \ \mathrm{m}\) from Kerbin’s surface and our \(r_1\) and \(r_2\) distances remain the same for the circularisation burn. Plugging the values into the vis-viva equation: