In computing, programs are loaded by progressively smaller and smaller programs, and a bootloader is the smallest of such programs. When you power on a computer, it will first boot the BIOS (Basic Input-Output System) firmware which performs some tests and then boots into the Operating System (OS). More precisely the standard boot up process is as follows:

Although real-mode is a 16-bit mode, the 32-bit registers are still available and usable. In real-mode, there is little over 1 MB of addressable memory including the High Memory Area. Now that we understand what real-mode is, let’s get started.

I will be using NASM because it’s the most ubiquitous flavour of assembly. Since the x86 real-mode defaults to using 16-bit instructions, we want the assembler to output instructions as such. To operate in the 16-bit mode, we need to tell the NASM assembler that we are operating in 16-bit mode using the BITS directive.

We already know that the BIOS will copy our boot sector to the memory location 0x7C00 thus we need to use ORG directive to specify the origin address at which we expect our bootloader to be loaded to.

Addresses in x86 processors are calculated by adding the segment address value to an offset value. x86 processors use 16-bit segment registers in both real and protected modes. Thus it’s important to ensure that our segments, in particular, our stack and data segments refer to sensible 64K regions.

Although we won’t explicitly be using the stack segment, its good practice to set up one — especially given the fact that some instructions explicitly make use of the segments. It would also be inappropriate not to define a stack if the bootloader were to be expanded beyond our current functionality. I am going to structure the bootloader such that it has a 1K stack just after the location of the boot sector in memory. Our boot sector will be loaded into 0x7C00 and is 0x200 (512) bytes wide, we want our stack to reside just after this. In x86, segments are referred to as 64K chunks of memory and not as specific locations.

Before we assign the final location to the stack segment we need to divide the address values by 16. The code to set up our 1K stack is as follows:

Now that we have everything set up, we want to print out some text to the screen. To do that, we can make use of the BIOS interrupt calls which allow us to invoke the facilities of Basic Input/Output System. BIOS only runs in real mode and if we want to make interrupt calls, our program must also run in real mode. Because our program is already running in real mode, we don’t have to worry about that. To write some text to the screen we must first define it.

To access the string stored in memory we need to know where each character in the string is stored in memory. To do that we need to perform pointer addressing of the string data using the Source Index (SI) register. To print a character onto the screen we want to use the ‘Video Services’ interrupt while setting AH to 0EH. This allows us to write a character to the screen in TTY (TeleTYpe) mode. The character that we want to write to the screen is to be stored in AL. We use the LODSB instruction to load the byte at DS:SI into AL and increment SI so that we can access the next character progressively. We want to loop over each character until our loop hits the null-terminated end of the string. To check for a null value, we can perform a logical OR on the value present in the AL register. If the value is null, the Zero Flag would be set and after which we can halt execution to freeze the text on the screen.

Now we’ve finished writing the main bulk of our program, we just need to pad the remaining 510 bytes with 0s and define the boot signature that we talked about earlier on.

Save the file as boot.asm and assemble it using the following command.

Before you assemble the file using NASM, do make sure that you have NASM and QEMU installed on your host. If you’re using a Mac you can install NASM and QEMU using Homebrew.

If you encounter an error with the brew link process run the following command.

QEMU will open up in a separate window and boom you have written your very own bootloader! 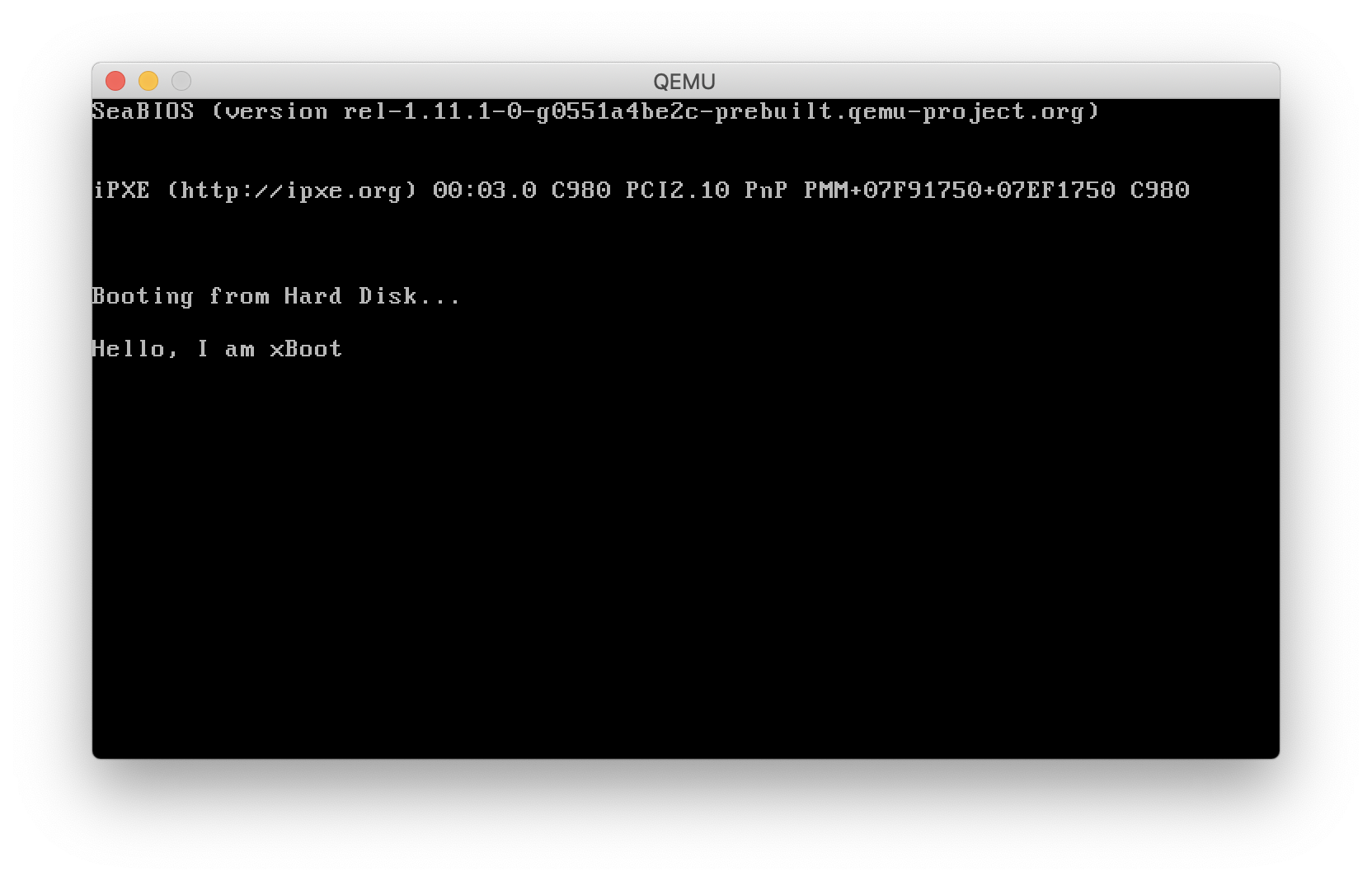